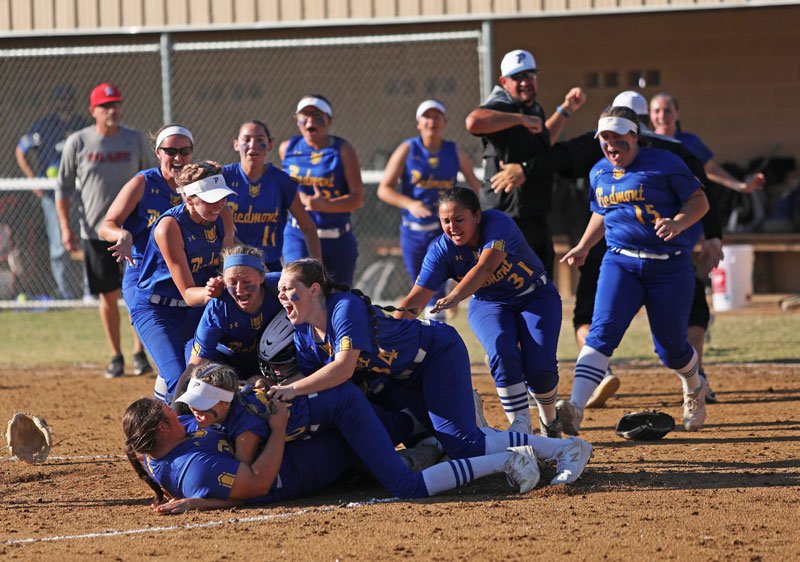 Ellie Griffin felt the nerves as she stepped into the box for what would be her final at-bat.

The Wildcats drew even with Carl Albert with four runs in the top of the seventh inning to force extra innings. Griffin stood at the dish with runners at first and second base in the eigth, the game still tied.

“I was definitely nervous,” she said. “But after the hit I was like holy cow, this is actually happening”

“This might be the best moment of my life.”

Piedmont had experienced the scenario before. Two years ago they faced Carl Albert in the state title game, missing out on multiple opportunities to come away with the win. Saturday, the battle-tested Cats prevailed, overcoming a 4-0 deficit with their backs against the wall in top seventh inning.

“We’ve worked too hard for this. This is our moment.”

The Wildcats missed on an opportunity to strike early in the game, leaving the bases loaded in the top of the first after seniors Kennedi Morelock, Chloe Bohuslavicky and freshman Karissa Fiegener each drew walks. They struggled over the next five innings with just one hit in 17 at-bats prior to forcing extra innings.

“As we got down 4-0 we kind of starting drifting into that mindset like we couldn’t do it,” Rowland said. “But then we got it back together and realized we had to stay in the game and stay confident.”

Bohusavicky helped save the Cats throughout the game, keeping the team within striking distance three times.

The four-year starter came up clutch in her final high school performance. After giving up a leadoff home run to Aerin Talley in the bottom of the third and then two hits and a walk, she stranded the bases loaded. She cut off a Titan run again in the third, recording three straight outs after an error and a single gave Carl Albert a 2-0 lead. And after giving up two runs in the fifth, she once against left the bases loaded to keep the game close.

“Not losing my mind,” Bohuslavicky said of how she kept her cool in the circle with runners on base. “That is a scary team to pitch against. They have a lot of really good hitters up and down the lineup. I just had to rely on my defense and relax to get out of it.”

Brown sparked the team’s rally in the seventh as well, reaching on an error before a single to right field by Rowland. The team’s patience continued to pay off as Clark, Griffin, Morelock and senior Jordan Collins drew four straight walks and a wild pitch, pushing acorss three runs to tie the game.

“All year coach told us we would face adversity,” Bohuslavicky said. “So we were expecting to score. We knew we would step up in that situation.”

Coleman watched as his team celebrated after the game. His team finally accomplished its ultimate goal.